Showing posts from November, 2014
Show all

Flipping out in antique shops my new hobby

I’ve always thought downtown Glendale would be just a little bit hipper if, instead of having approximately 138 competing antique shops, it had literally anything else. Not to say the antique shops aren’t fine, but it always seemed like overkill. Replacing just one of them with, say, a cool bar or a vegan lunch spot would, I always thought, go a long way toward attracting a more diverse clientele.
I held this line of thinking, however, without ever having stepped foot inside one of these antique shops. Not that I ever had anything against antiquing (legitimate verb, apparently), but I don’t know a good antique from a bad antique, and my perpetual mission in life is to get rid of stuff, not acquire more stuff. If my wife and I were both acquiring stuff, we would be on “Hoarders” next week and I would be buried in scented candles and children’s toys.
Walking through downtown Glendale after Oktoberfest last month, my wife and some of our friends did a little window shopping at the antiq…
Post a Comment
Read more 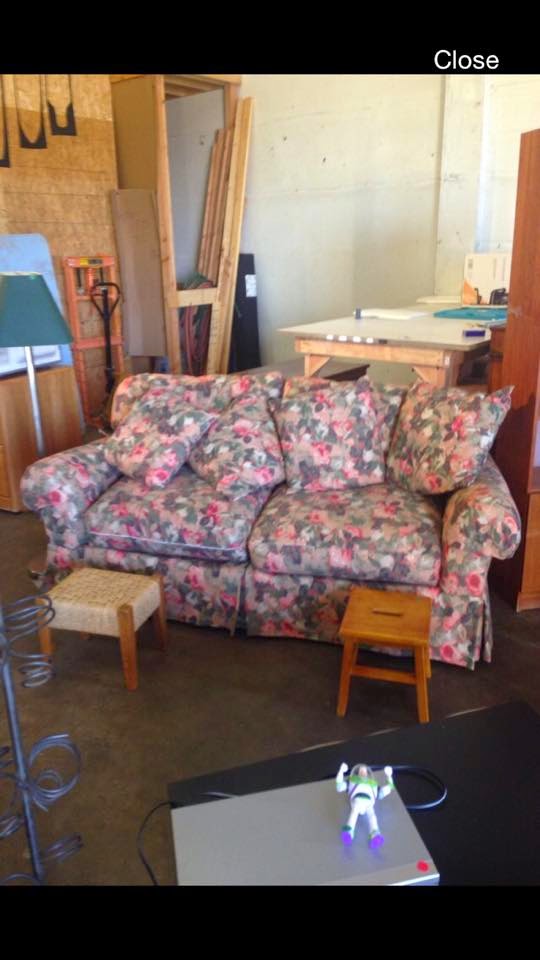 Cool. I could use a watch from a yard sale. And email seems like the perfect place to get it.

My name is David Bailey and I created a FREE yard sale
app called " yard sale watch " for the Iphone.

I bet Mr. and Mrs. Bailey are proud. And that's coming from someone who creates FREE spam email writeups on his blog.

If you see a yard sale or if you are having a yard sale, just click the blue house button on the app and it pins your location. You can add up to 3 photos, share it on facebook,twitter

Here is me doing that:

I just checked in at [total stranger's driveway]. Trying to talk them down on this: (picture of XXXXL Sean Jean t-shirt on hanger) and this: (picture of Warren Beatty-signed Dick Tracey movie poster) If you're on #yardsalewatch holla atcha boy. (selfie) Oh, and anyone out there know the market price for this? [404 ERROR - YOU HAVE EXCEEDED MAXIMUM AMOUNT OF PICTURES ALLOWED ON YARD SALE WATCH APP. PLEASE CLOSE APPLICATION AND RE…
1 comment
Read more

The big Thanksgiving traditions are properly acknowledged—ad nauseam, if you ask me—every year. There are, however, some important Thanksgiving traditions that have not been given their just due. So today I would like to do just that.
The famous Thanksgiving salmon. If you’re vegetarian like my wife and I, then you shirk the traditional turkey in favor of something that contains considerably less bird meat. (By the way, as vegetarians who eat fish, we are technically “pescetarians,” but I am not even going there. Most people we meet in Arizona are already flabbergasted by the term “vegetarian.” There’s no need to make it worse.) And the closest thing to bird meat is a dead, pink fish. It’s not like we’re going to eat some flimsy tilapia. I mean, it’s Thanksgiving for crying out loud, not Memorial Day.
If you think family rolls their eyes at your vegetarianism the other 364 days a year, just wait until Thanksgiving. I remember our first vegetarian Thanksgiving like it was yesterday … (…
Post a Comment
Read more

Part of me wants to believe this is a legit email requesting a quote on a classified ad for furniture. But the rest of me knows beyond a shadow of a doubt that this is a bonkers spam-jam that will try to sell me a recliner. Are my instincts correct? Let's see who this is from.

Whatever happens though, this is dope. I like this. Respect Director? Maybe that is not technically my job title right NOW, but it will be when all is said and done, even if I have to agree to a 25-percent pay cut in the process. But it won't even matter because I will immediately turn around and fire my boss on account of that blatant disrespect and give myself a raise out of respect for myself. Any questions? Didn't think so. Now everyone get back to respecting one another, aiiiiight? If you need me, I'll be in my office, a.k.a. the Chamber of Respect. Mad respect, son.

Welp, looks like my abandoned package is finally ready for delivery. This is going to sound weird, I know, but I've been waiting for an abandoned package to be delivered to me by my good friend, former mayor of New York City, Michael Bloomberg. So let me just check who this is from ...

Word. True story: My friend Michael Bloomberg's email address used to be mbloomberg@nycmayor.gov, but since he left office, he wanted to keep a low profile, so he changed it to daan@petrokimia-gresik.com, which represents a bunch of inside jokes that only me and Michael Bloomberg are privy to. He's actually hilarious, Michael Bloomberg. We LOL.

But this sounds serious. What's up, Michael Bloomberg? Is everything OK?

How are you today? Hope all is well with you and your family? I hope
this mail finds you in an excellent condition of…
2 comments
Read more

On giving two sheets, and folding them, too

November 12, 2014
My wife and I do not fight often. We share a similar, oftentimes offensive, sense of humor, and are alike in enough ways to where we’re rarely at odds. When we do fight, however, sheets are almost always involved. And no—we’re not between them.

We are either folding them or putting them on the bed. Both of those things are THE WORST, but if I had to pick one that’s worse than the other, I would pick both.

Folding the regular bed sheet isn’t so bad. As long as I am standing at a proper distance holding my side tightly, ensuring no wrinkles, and, when it comes time to fold over, I fold in the same direction as my wife, which is something I have to guess at because she doesn’t tell me, and I never guess right. In her defense, if she were to say, “Now fold to the right,” by the time I was able to process whether she is talking about her right or my right, she would have already folded her side and be extremely annoyed that I was still standing there with my mouth open like a fool.

SZFC International Co. is a factory and trader of color changing mugs located in China.

SZFC International Co. needs no introduction. But thank you.

What are color changing mugs?

Mugs that change color? I'm sorry, that was stupid of me. I hate myself. I don't know.

● To pour in HOT water, the mug changes colors magically ;

● To pour in COLD drink, the mug changes colors magically too.

This sounds very complicated. Do you have pictures of this mug magic?

What kind of sorcery is happening here? I cannot condone this type of black magic. J/k I would like 10 NesQuik bunny cups to impress my friends. I have to ask though, because according to the documentary Food Inc., the magic contained in color changing mugs is often toxic cow semen: Are these mugs FDA-approved?

Is that an answer?

We are audited by Disney, AVON CPA and Sedex are available.

November 07, 2014
Subject: SEE THE REASON WHY YOU HAVE NOT RECEIVED YOUR PAYMENT‏‏‏‏‏‏‏

Because our fantasy high school girls volleyball commissioner is the WORST, that's why.

Sometimes i do wonder if you are really, really with yourself.

Is that you, Plato? Not sure I've ever been hit off with the realness this early on in a spam email. Because you know what? I wonder the same thing sometimes. Am I really with myself? Or am I a dope rapper-turned-actor stuck in the body of a lanky, gray-bearded white man? Also, what is space? How did matter as we know it come to ex-

How could you keep trusting people and at the end you will loose your hard earned money, or are you being deceived by their big names?

Indeed there are few bigger names than Gen. D. Rubben Brett and the Rev. Al GreenJohn Anderson, so you can't really blame me for being easily deceived.

Their game plan is only just to extort your hard earned money. Now, the question is how long will you continue to be deceived?

This is the subject. Exactly the subject header a true diplomat would use. What's poppin', Dougie Fresh?

I am Diplomat Douglas Wilson I have been trying to reach you on your telephone about an hour now just to inform you about my successful arrival in Syracuse Hancock International Airport, New York (USA), with your two boxes of consignment worth $2.5 million USA dollars which I have been instructed by FEDEX DIPLOMATIC COURIER COMPANY to be delivered to you.

They say don't bury the lede, and Diplomat Douglas Wilson certainly does not. Strangely, I have been right next to my phone for the past five hours, so the ringer must be off. Which stinks because I have always suspected my sudden riches would be somehow connected to an airport in Syracuse that I literally just discovered existed.

Nevertheless, shout out to the FEDEX DIPLOMATIC COURIER COMPANY for instructing you to give me $2.5 million in box money for no apparen…
2 comments
Read more

November 04, 2014
Janice was a girl who lived around the block from our house when I was growing up. She was cool, but also a little rough around the edges. She always seemed to be into the bad stuff just a little too soon.

One time, I, my sister Jill, and Janice were hanging out in our backyard and playing some game where we were jumping off our picnic table. During one of her jumps, Janice mooned us on her way down and my sister and I had no idea how to react except to later agree in private to not hang out with Janice anymore. I still have the image of Janice’s bare butt imbedded deep into my psyche, and not in a good way because I never thought of Janice like that. (Possibly with good reason. My sister said the last time she saw her, Janice had short, spiked hair and was wearing a sleeveless T-shirt and holding hands with her girlfriend.)

A few months later, after avoiding Janice at all costs lest I fall victim to having to see her butt cheeks in midair again, I was walking home from my cousin’s ho…
Post a Comment
Read more
More posts