Showing posts from February, 2011
Show all

February 25, 2011
According to an emailed press-release I received today at work:

Due to unforeseen circumstances, The FATAZZ MEATBALL COOK-OFF! has been cancelled.

Remember when the 1994 World Series was canceled? This is like that. Except much, much worse.
3 comments
Read more 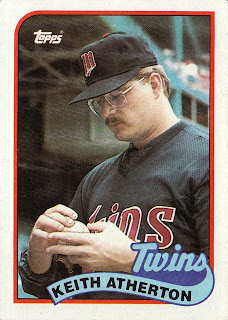 Where do I start? First, I love you. The way your seams feel in my hands makes me happy. I am smiling. Not on the outside, because I need to strike fear into my opponents by making them believe I will not hesitate to throw you at them. But on the inside.

You are a small little ball, but you have made my wildest dreams come true. Some people criticize your size. They say, “A baseball is too small! A ball that small will never achieve success in America! I can’t even see that ball it’s so small!” But if you were any bigger, I would not be able to throw you with such velocity and accuracy. You proved them all wrong, baseball. We proved them all wrong. I can see you just fine. With my glasses. When I am not wearing my glass, you look like a bloodstain on a blurry white rhombus.

Baseball, you have given me confidence to, among other things, grow a mustache. If it weren’t for you, I’d be working at daddy’s stupid firm. Just another Atherton son at A…
Post a Comment
Read more

Sometimes when a person asks me why we moved from New Jersey to the Valley, I will say, simply, “spring training.” This person will then say, “Wait—you left your family, friends, jobs, and general way of life behind and traveled cross-country just for one month of exhibition baseball games, most of which are played during the week and which you will not be able to attend because you have a job?” And I will say, “Yes.”

This isn’t entirely true. We moved here for many reasons, but I’d be lying if I said spring training wasn’t one of them. Now that I’ve been to so many games, I can say that I actually underestimated the awesomeness factor. In that regard, and with games beginning this weekend, allow me to share some advice regarding spring training that I have acquired over the years. Ignore this advice at your own risk. 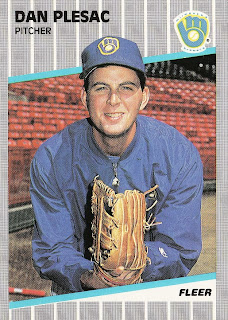 Cameraman: Alright Sac-man, give me that All-American schoolboy look you’re so famous for.

Cameraman: Good! Click, flash. Perfect. I think we got it.

Cameraman: Now take your shirt off.

It’s difficult for me to know until you ask the question, but: no, I did not.

Came within one save of tieing club record in 1988 …

No rest for the weary, sayeth the dragon

Note: This column appears in the 2/17 issue of The Glendale Star and the 2/18 issue of the Peoria Times

One of the things fatherhood has taught me is that sleep is overrated. Eight hours? Pfft. I have not slept eight consecutive hours since college (back then I called that a “nap”).

I’m not complaining though. There are positives. For starters, getting to sleep takes zero effort. There used to be a time when falling asleep wasn’t so easy. Now? I could fall asleep while waiting at a red light. And by “could” I mean “do.” Also, if the quality of one’s sleep is relative to the weirdness of his dream…
2 comments
Read more

February 11, 2011
Many months ago, I entered a Real Simple magazine writing contest. SPOILER ALERT: I lost.

I wasn't going to post my entry here for a few reasons. One, it's a little bit on the sappy side (I figured a heartfelt piece about how we came to adopt our daughter, from a male perspective, would hit those ladies -- I assume only women work at Real Simple; is that wrong? -- right where it hurts: in the heart. Strategy fail), and I've had a few too many of those in the past few months. What can I say -- I'm getting sentimental in my young age. Also, I try not to write too much about our daughter here, because no one wants to read about other people's kids (unless of course it's me reading about your kids; they're adorably hilarious! And smart!), and because some of this I touched upon in an earlier piece about the adoption.

But then I figured, screw it. I worked really hard on this, and I didn't want it to go to waste, even if it wouldn't earn me the $3,000 fir…
5 comments
Read more 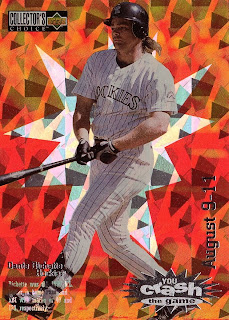 Hey kids—would you like the crash the game? Yeah! Okay, cool! Here are the rules:

Rule No. 1: Try not to have a seizure while looking at this card, so you will be alive and healthy enough to crash the game. It is important to not attempt to read any of the violently reflective text here, which is cleverly disguised as information, but which will, in actuality, give you 0/-2 vision. Do not operate machinery or your bicycle for eight hours after viewing this card.

Rule No. 2: Be open-minded to a new definition of what it means to “crash” an event. Traditionally, to crash something is to show up uninvited and not really care. In this case, we are cordially inviting you to send us money, and the event we are inviting you to crash is not so much a game, but a process by which you send us a check. Don't get caught! Ha, ha. You’re 10—you have checks now, right? Yeah? Good. Let’s crash the game! Here are the real rules:

Hey, you know what turns out is not so good for dogs? Rat poison.

Yeah, so our dog got into some rat poison recently. This actually happened a few weeks ago, but I only now feel well enough to write about it in a lighthearted and sarcastic manner. It was great!

What happened was this: My in-laws have an exterminator for their house here in AZ, but they informed him upon his first visit not to drop any dangerous chemicals, as we bring our dog there frequently. Well, a different guy from the same company did the service call recently, and nobody thought twice about it. So, we were having a grand ol’ time in the backyard when my brother-in-law and I noticed our dog Mac enjoying a little appetizer in the corner of the yard.

After we pulled him away, I saw the bag on the ground. My heart sunk, because all I could see from afar on the bag was a bunch of fine print, undoubtedly explaining in d…
Post a Comment
Read more 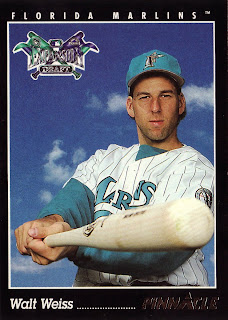 Throughout the years of my life, I have maintained a great fondness for the “bat head aimed at the camera”-type photograph. It implies three-dimensionality—making me feel quite involved in the action—and it makes the bat-wielder appear rather menacing, which is an attribute I appreciate in bat-wielders. Nice guys finish last, after all.

Take Walt Weiss ( … “please!” Sayeth the Marlins circa 1993. Ha, ha! Those Marlins are hilarious). Here Weiss says without words, “I play baseball. Now get out of my way, nine-year old boy looking at this card, before I swing this baseball bat at your friggin’ head! Where are your parents?” Really, someone is going to get hurt here. And it’s not going to be Walt Weiss.

Or, maybe it will be:

Walt should provide the fledgling Marlins

At this point, in 1993, the Florida Marlins had yet to play a professional baseball game as a franchise. Yet, they were already fledgling. I mean, can we give them time to fledge here? Take it easy, Pi…
1 comment
Read more

The King, tacos vie for our fleeting attention 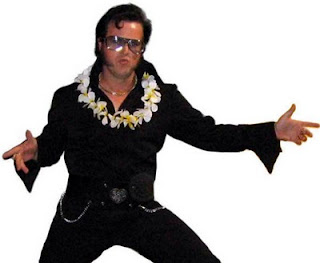 Note: This column appears in the 2/3 issue of The Glendale Star and the 2/4 issue of the Peoria Times

My favorite gimmicks occur at sporting events. For whatever reason, many venues and corporations believe that people who attend sporting events need a distraction from a distraction, and do not have the attention span to watch the actual game. They called a timeout? What am I going to do for the next two minutes of my life? Enter the t-shirt canon.

Case in point was our trip to the Coyotes game last weekend. Here is a franchise that endured several years of turmoil and the threat of relocation, and not only survived, but thrived, thanks in large part to the type of loyal fan base for which the sport of hockey is renowned. And hey—you know what would make that fan base’s game experience that much better? Elvis.

As we entered Jobing.com Arena and made our way to our seats, we found ourselves behind an Elvis impersonator along with the emcee for that evening’s crowd-pleasing gimmicks. As we…
Post a Comment
Read more
More posts