But these things I do

January 13, 2022
I would like to talk about Elton John, who is (along with Bernie Taupin) widely considered one of pop music’s premier and most legendary singer-songwriters. Which I am not here to dispute. Elton John is great! I love him. We all love him.
HOWEVER. Within his illustrious canon of music are several lines I have never been able to reconcile. And these aren’t from deep cuts, but two of his most popular and famous songs, including one of my all-time favorites, “Rocket Man.” I think we’ve collectively given him a pass for these lyrics, one he’s undoubtedly earned, but the honeymoon is over after the Uber Eats commercial, and justice must be served right now, right here, on a blog nobody reads.
----------

It’s true that Mars is not the kind of place to raise your kids, and it’s about time (1972) somebody said it. To back up this point, I personally would have noted that Mars is a different planet with no civilization—no playgrounds, schools, chocolate milk!—that is basically uninhabitable (at least circa the mindset of 50 years ago). Elton went with “it’s cold,” which is fine. But as for nobody being there to raise his kids … wouldn’t uh, he be there, on Mars? Or was he planning to drop them off? It begs the question of who is raising Elton’s hypothetical kids on Earth. Nevertheless, what’s truly bothersome is:

And all the science, I don’t understand

Elton, you’re an ASTRONAUT. What do you mean you don’t understand the science? This isn’t a gd school bus. As ludicrous as this line is, the thought of Elton John boarding a rocket ship wearing huge glasses and a full-length, fluorescent green glittered coat, saying in his British accent, “Don’t bore me with all the mumbo jumbo, just get me to bloody Mars so I can drop off these brats,” as several NASA employees struggle to get him into a spacesuit pleases me greatly.

Just a blue collar guy, Elton John. Clocking in and out, 9-5, at his regular job of ASTRONAUT. Brown bagging a pb&j, grabbing a drink with the fellas after work every now and then. Union guy. Oh, a major satellite malfunctioned and you need him to head up to space and fix it on a Saturday? Don’t even bother asking. Even at time and a half, that’s his time. This is just a job.

Straight ran out of lyrics, so let’s just sing the name of the song here. No one will notice.

OK so the other song in question, “Your Song,” is unique in that the song itself is intended to be a gift. In that sense, it should be beyond reproach lyrically. It is not.

If I was a sculptor, ha
But then again, no
Or a man who makes potions in a traveling show

I know it's not much, but it's the best I can do
My gift is my song, and this one's for you

Let me start by saying WHAT.

An editor would have said to Elton, “Elton, instead of imagining a scenario and then scoffing at it and starting over, just don’t do that. Delete that part. Don’t mention it. Why are you mentioning it? Also, it should be ‘were a sculptor,’ not ‘was.’ But again—delete it.”

The editor would have continued: “And what’s up the ‘or?’ You told your audience to forget that first part. So to what is the ‘or’ referring? It can’t be sculptor, because you laughed at that idea and said ‘no.’”

Editor: “But honestly, Elton, let’s take an entire step back and look at this more broadly. You have not completed a thought here. Let’s set aside the fact that ‘man who makes potions in a traveling show’ is arguably the most bizarre and unrelatable scenario you could have possibly imagined. ‘Hey baby, here are the potions I made today in the traveling show. This one is called I Love You. This other one is called Sex Me.’ Is THAT a thing? Being a sculptor makes more sense! Why did you laugh at that? Ugh, anyway, whatever, OK, fine. What IF you were a man who made potions in a traveling show? Then what? You follow that up with ‘I know it’s not much’ … you know WHAT is not much? The potions?"

So excuse me for forgetting
But these things I do
You see I've forgotten, if they're green or they're blue
Anyway the thing is, what I really mean
Yours are the sweetest eyes I've ever seen

“ELTON! You forgot their eye color? Don’t put that in the song! That is bad. Delete this entire part. The last line does not salvage this mess. What are sweet eyes? No. NO! This is never gonna work!” 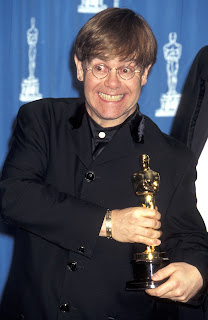 Tony Hudnell said…
I read Rocket Man as set in the far future where being an astronaut is like checking into a 9 to 5 job. And by then, Mars, while populated, is still a rough place where you would not opt to raise your kids (since in the far future it has become an option). Being a rough place, there would not be the village there that it takes to raise a child, so one would not expect much help. The Rocket Man, however, wants to escape his drab future job and start a new life, but all the realities of his far future situation (which can parallel some of our current situation), keep him in his daily rut.

For Your Song, I picture the eyes as a green/blue mix, which is what makes them so mesmerizing.

Kampus Swasta Terbaik said…
i really love Elton John too, what do you like about Elton John
8:44 AM