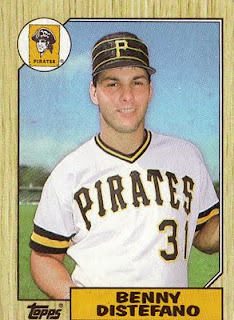 Benny Distefano—you are not going to believe this—is from Brooklyn. I know, crazy, right? Breathe that one in. I’ll give you a second.

(In the meantime, I have a theory about life that goes like this: Everyone is from Brooklyn. It’s a pretty self-explanatory theory, based on years of being married to an Italian from Brooklyn and, as a result, finding common ground with many, many others who are also from Brooklyn. It’s such a fail proof theory that there’s not even a question of whether or not someone’s from Brooklyn—only where in Brooklyn. Seriously, take anyone. Off the top of my head … Michael Jordan. From North Carolina, right? Nope—Brooklyn. How about … Mikhail Gorbachev? Brooklyn, originally. I could go on, but the point is that every single person who exists is from Brooklyn. It’s the great common denominator. Really, try it next time you meet someone. I think you’ll be surprised at the results.)

So far, we have discussed nothing about Benny Distefano’s baseball career. That’s alright though, because what I really want to know from the outset here is: what does Benny Distefano enjoy doing from a leisurely standpoint? 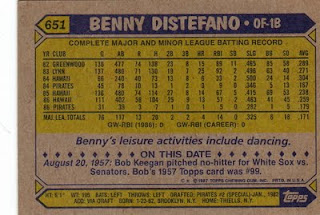 “My name is Benny Distefano. I am from Brooklyn. I like to dance.” That was the title and also the full content of a biographical essay Distefano wrote in second grade. It is also the phrase he speaks into the microphone each time before he dances at a public event, which is many times throughout the calendar year. And when that phrase is followed by the instantly recognizable bassline of Britney Spears’ “Toxic,” watch out—you’re in for a show.

I have to admit though—I have always had a problem with the use of “leisure.” To me, a leisure activity is not one that is merely separate from one’s full-time employ. It should imply a general sense of laid-backedness. I mean, dancing is hard freakin’ work. I don’t know, maybe it’s just the way I dance, which is violently erratic with inappropriate groin thrusts, but still. Distefano is listed here as a first baseman and outfielder. Even if his specialty is ballroom, I have to believe that’s less leisurely than his day job.

Benny Distefano was always the bridesmaid but never the bride.

Anyway, what is Benny Distefano’s most significant achievement?

Significant Achievement
Benny Distefano is one of a very few players who tripled in their first major league at bat; moreover, he did it against someone who went to the same high school he did, Pete Falcone. He accomplished this feat on May 18th, 1984 when he subbed for an injured Amos Otis.

Indeed, Benny Distefano’s most significant achievement was the time he tripled in his first major league at-bat off a dude who went to the same high as he did, all because freakin’ Amos Otis was hurt. This was, amazingly, the second time that Amos Otis indirectly caused another person’s most significant personal achievement. In the late 1600s, Ferdinand Verbiest designed the first working steam-powered vehicle after his buddy, Amos Otis, fell off a horse.

Did you know?
Ferdinand Verbiest was from Brooklyn.
Brooklyn Classic cards steam-powered vehicles

Anonymous said…
He is also a swinger
6:15 PM